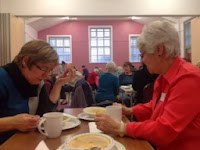 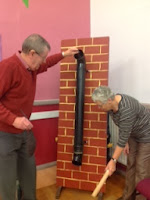 Saturday morning....can't quite believe that we are at the end of the week. Although this will be my last blog from visiting the teams, I will add some reflections over the next couple of weeks. If you have been involved with TOGETHER in any way I'd appreciate your reflections, comments & good news stories so please send them to me. This morning I went along to North Shields Methodist church for a family games morning & lunch. A great reminder that offering simple activities, hospitality and a safe place to meet is often all that is needed. 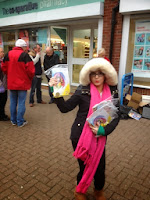 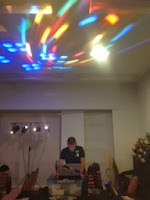 The Consett/Delves Lane team had sent out prayer requests as they'd changed the time of their open air service at the market place because of the weather forecast. It seems they got it right as they had only just finished when the rain came. Over the last 3 days the team has given away well over 1000 Bags of Hope & talked to many, many people. 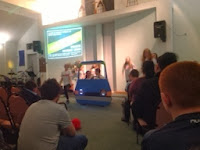 Then off to Wrekenton for the joint youth event 'CONNECT'. DJ Sean kicked the night off then it was over to youth workers Andy & Jill who hosted the evening & kept the event rolling. KoGs (Kids of God) from Lanchester led worship & MAD from Delves Lane shared 2 amazing dances. Local leader Ian Stimpson shared his experience of bungee jumping in New Zealand & linked that to our need to trust God. Over 100 people attended this - the majority being young adults or under 18's. It was a very diverse group (a good number had never been to a church event before TOGETHER) and 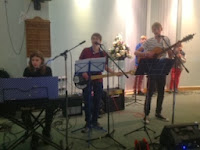 everyone involved did a great job interacting and keeping people engaged. This was a great way to round up the youth work that's been going on through the week. And a good reminder that young people ARE still interested and do still want to know more about God...particularly when good folk get alongside them & demonstrate that God has made a difference in their lives. Everyone has worked incredibly hard on TOGETHER, but I have to say that those who'd been involved in youth work through the week looked particularly exhausted. Once more, a huge thank you to those who have given so much of themselves.  Even though it was late when we'd packed up and everyone was tired, people just weren't in a hurry to go home. I'm praying that the experience of this week will be something that God uses to change us & transform us more & more into the likeness of Christ. Many of us are already thinking & praying 'what next Lord?' - watch this space.... 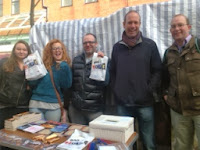 Friday morning and Rob Wylie & I set off to the team at Consett & Delves Lane. Thursday, Friday & Saturday they are at Consett Market place giving out Bags of Hope, free literature, chocolate and lots of smiles. Like the Alnwick team & the Bede team they were also collecting prayer requests from anyone who was happy to stay & chat for a while. Considering it was Friday I was impressed with the energy & enthusiasm of this team....it really was contagious. We were invited back to the church for lunch (a BIG thank you to all the good people who have baked & supplied food for the teams this week). At the lunch an interesting conversation arose from some of the younger members of the team. They'd been asking the team leader for my address so they could write to me & tell me we MUST do TOGETHER again next year! One of the young people then started to tell the minister how they could raise money to do it too. It was just so wonderful to be part of their loud, exuberant excitement and their delight at having been part of this special week.
Fantastic team! 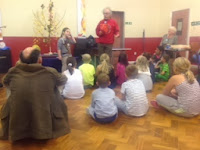 Then over to Sunderland, St. Andrews Southwick, for their Light Party. Great to see families engaging in crafts, games & quizzes. Local leader Eunice gave a short talk about Saints and then team leader Graham presented a magic show (so many talents on these teams). We left just as they were having tea (we really can't eat at every visit). Then travelled over to Windy Nook to pop in & see the team who were facilitating an Urban Skills youth night. The football cage was a hit again, and some of MAD dance group from Delves were there to lead a dance workshop. 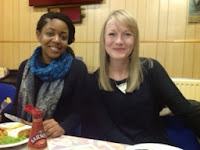 Then the final event we visited today was back up at Delves Lane for their youth drop in. Wonderful again just to see a place full of non-church kids. Yes its loud, yes it's messy...but I found it a very exciting environment to be in. Good news - some of the kids from this week have asked to join MAD (music & dance group) so keep praying for the leaders up at Delves as they continue this work. Our Youth President Tamara Wray visited last night too, as did our new Regional Team Coordinator Tricia Mitchell who has been traveling around with me to meet the teams. Tricia said, 'Wow! What wonderful people - team, guests and passers by. I've been touched by God through this week.'
I think though TOGETHER many of the volunteers, and myself, have rediscovered some of our roots. Things we maybe used to be involved in but had presumed were dated and wouldn't work anymore. But on the whole, when invitations have been given in love and with respect, people have responded.
Posted by Unknown at 02:35 No comments: 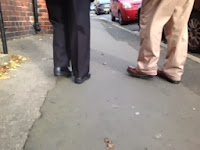 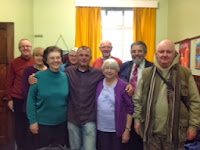 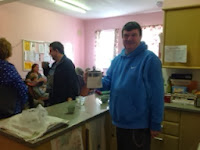 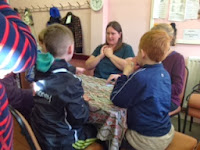 Thursday morning I visited the team at Lemington in Newcastle. A small team who are encouraging prayer and bible study in the congregation and then going into the community prayer walking. I was chatting to one of the Lemington members who told me that her and another lady prayer walk and meet each other to pray every week. I came away from Lemington thinking that while there are still pockets of praying people in our churches there is hope. Then in the afternoon Rob & I went through to visit the team serving in Pelton/Birtley. Not many adults had come into the Labyrinth & coffee that day but they had attracted a group of boys who were enjoying the tea & biscuits & playing games with the team. The boys also interacted with the labyrinth....one of them seemed to be dropping a lot of stones into the water at the table that talked about giving worries to God. I asked if he had a lot of worries, 'I have' he replied. 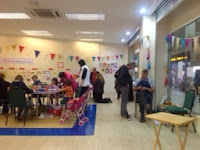 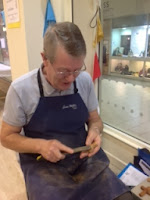 Then in the afternoon I was delighted to finally visit the 'Pictures of Love' exhibition & craft activities in a shop in Whitley Bay. 'Pictures of Love' was a project Rob Wylie had initiated and it was good to see it being used so well. Around 60 people have been visiting this each afternoon, & I can understand why. There was something for all ages, crafts, art exhibition, a cup of coffee and a warm welcome...and all for free. It was interesting to think about how on Halloween the TOGETHER team had provided a space to engage with crafts on the theme of love. 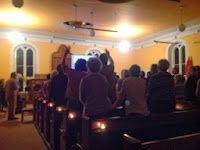 In the evening we travelled back up to Alnwick for their final evening celebration & thanksgiving (on the theme of Light). What a way to finish their week. There were testimonies, tears, hugs and promises to keep working together. So many lives have been touched here & almost everyone involved has been challenged to keep on sharing the light & love of Christ. Church member Joy said, 'every minister, lay person, village & town should be out there listening to the hurts of the world'. Team member Hodge said, 'This week has completely blown me away'. Team leader Alan said, 'Going out on mission has helped me recognise again the priority of mission which is why I was called to be a minister in the first place.' They all have become very aware of the deep need of people on their doorsteps and their faith has been lifted to the point where they feel they CAN do something. Please keep praying with me that this link between Alnwick & the team from Rowlands Gill (plus one from Stakeford) continues to flourish and bear fruit.